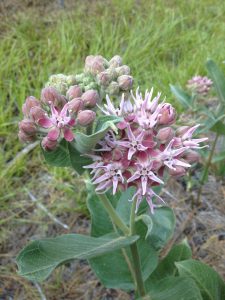 Across the U.S. and parts of southern Canada, milkweeds (Asclepias spp.) occur in a broad range of habitats including prairies, plains, deserts, open woods, pine barrens, canyons, arroyos, bogs, marshes, and wet meadows. Some milkweed species also successfully colonize disturbed areas such as roadsides, railways, and agricultural field borders. Excluding subspecies, there are 72 milkweed species native to the U.S. and Canada, at least 41 of which are found in the West. The vast majority of these perennial species are deciduous, although evergreen species do occur. In general, milkweeds typically flower between late spring and the end of summer. Fleshy, pod-like fruits develop after flowering, splitting when mature to release the seeds. White, fluffy hairs (also called the floss, pappus, coma, or silk) are attached to each seed and facilitate their wind dispersal. Following dispersal, the aboveground plant growth usually dies back to the ground. Non-evergreen species remain dormant through the winter, reemerging in the spring from established root systems. Evergreen species may continue to flower sporadically throughout the year in response to seasonal rainfall.

Unless you are already familiar with the native milkweeds of your region, you may not be able to identify different species if they are not flowering or bearing fruits. Milkweed flowers and fruits are very distinctive and easy to recognize, allowing confident identification when they are present. Because of this, the best time to positively identify milkweed is when it is in bloom or fruiting. While species identification is very helpful in knowing where each species exists across the western landscape, we are also interested in knowing where milkweed in general can be found, and if monarchs are using it. Even if the milkweed you see does not have fruits or flowers, as long as you can tell it is a milkweed that will be helpful to this project!

Milkweed flower color is variable across species and can be white, yellow, green, purple, pink, orange, or red. However, the structure of milkweed flowers is consistent, with each flower consisting of two main parts. Milkweed flowers are arranged in clusters. Depending on the species, the stalk that bears the flowers can be either erect or drooping. The showy, upper part of each flower, called the corona, consists of five hoods, where nectar is stored. The shape of the hood varies across species. Five petals – the corolla – form the lower part of the flower and are bent backwards in most species. 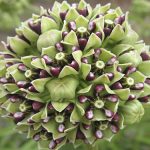 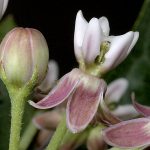 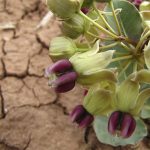 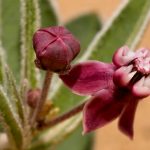 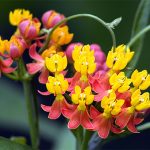 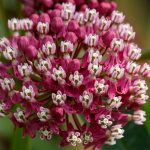 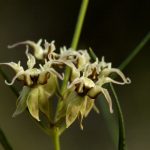 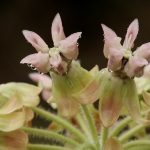 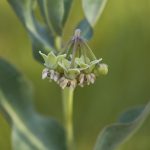 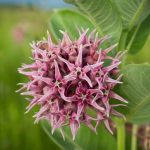 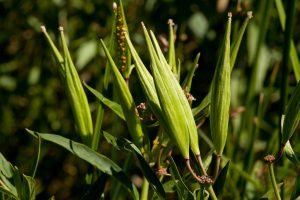 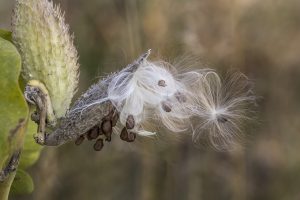 Milkweed fruits (pods) are also very distinctive, although their size and shape vary between species. When mature, the fruits split lengthwise, releasing the seeds. Each seed is attached to fluffy hairs (floss) that aid in wind dispersal. 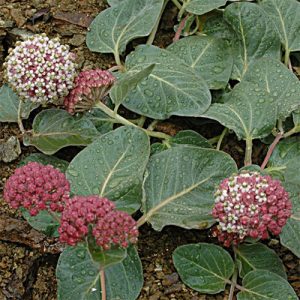 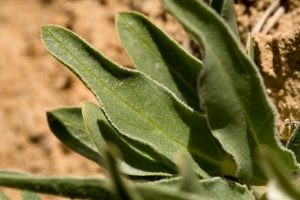 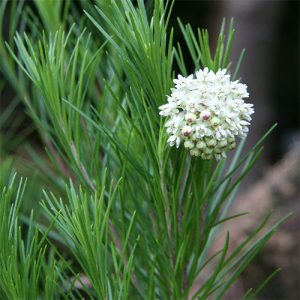 Milkweed species vary widely in leaf shape, size, and arrangement. Some species’ leaves and stems are covered in soft hairs while others are hairless. Across species, milkweeds are variable in stature, with some plants being tall and stout while others are low-growing and sprawling. Some species are colony-forming and grow in dense stands while others grow in multi-stemmed clumps or as scattered individuals. Leaves are most commonly opposite one another on the stem but some species have alternate or whorled leaves. 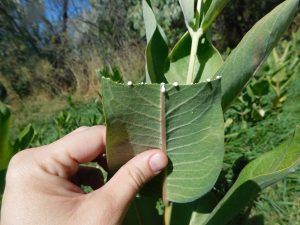 Milkweeds are named for their milky latex sap, which oozes from the stems and leaves when plants are injured. With the exception of butterfly milkweed (Asclepias tuberosa), all species ooze white sap when their tissues are damaged. To check for sap, tear off a small piece of leaf to see if it oozes from the torn area. Avoid any contact of the sap with your skin, eyes, or mouth, as it can be irritating. Milkweeds are not the only plants that have milky sap, but in combination with their flowers’ unique shape, this can help positively identify a milkweed plant. 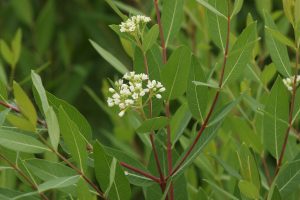 While our project focuses on tracking western milkweed species in the Asclepias genus, you may encounter other closely related species that look very similar. Some of these species, such as our native dogbanes (Apocynum spp.), also have milky sap, but have a very different flower structure than Asclepias species. Other relatives to Asclepias include plants in the Funastrum, Gomphocarpus and Calotropis genera. Funastrum (twinevine) is native to the southwestern US from California to New Mexico. These non-native species may have escaped into parts of California or can be found in garden settings.

Other plant species with milky sap include common dandelion, milk thistle, sow thistle, leafy spurge, and wild lettuce, all of which are widespread, sometimes weedy species. Depending on the time of year, you should be able to use flower structure, leaf type or hairiness, or fruit structure to help you differentiate these species from milkweed (Asclepias spp.). 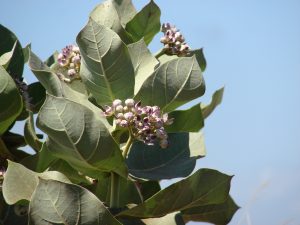 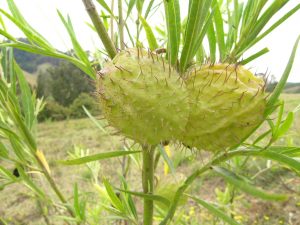 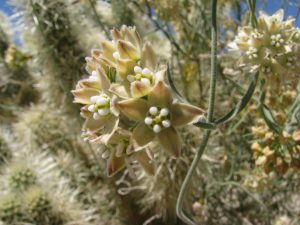